What will you learn in this section?

Dwejra is a site that exhibits a menagerie of interesting geological and geomorphological features.  In this section you will learn how the Maltese islands came to be, and will come to understand some of the processes that have formed different structures at Dwejra.  In particular, you will learn about these three types of geomorphological features: sinkholes, caves, and natural arches. Dwejra is a site that allows us to observe the entire sequence of formation leading from caves to tunnels, arches, and stacks.

How did the Maltese islands form?

Before proceeding to Dwejra itself, we shall first talk a little bit about how the Maltese islands came to be.  The captivating story of the islands’ formation will, in turn, help us better understand the beauty that we find in Dwejra.

First off, have a look at the figure below, in particular the blue-orange timeline at the top.  Do you see the yellow bit on the right?  That’s where our story of the Matese islands begins, at the beginning of the period known as the Jurassic. (The part from the Jurassic to the present day is expanded in the lower figure.)  As you can see, the Maltese islands’ story is a fairly recent one when compared to Earth’s lifetime!

The Geologic Timeline (Image: J. Caruana)
Now that we have had this brief look at the history of the Maltese islands, we can proceed to look in closer detail at some of the geologic processes and geomorphologic features that we find at the site of Dwejra itself. 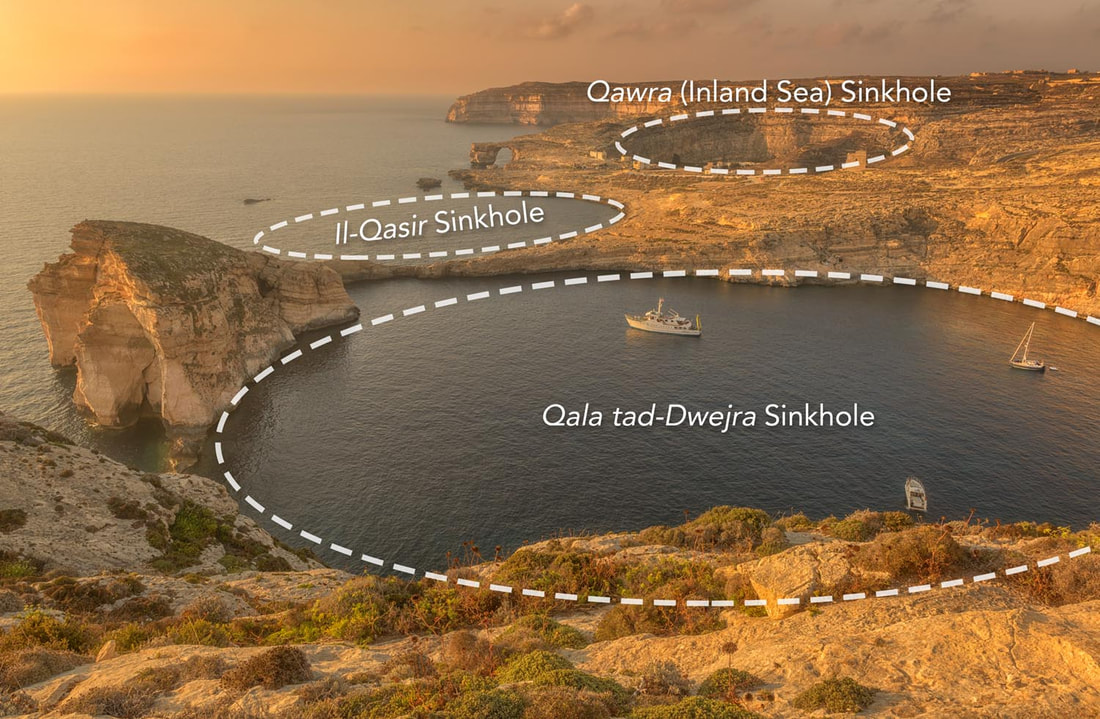 Three of the four sinkholes found in Dwejra. (J. Caruana)

THE INLAND SEA (QAWRA)
The Inland Sea (known in Maltese as Qawra) is one of the four sinkholes we find in the Dwejra area, and from a geomorphological point of view is possibly the most interesting feature at Dwejra.  Measuring between 300m and 400m, it is the largest subsidence structure at this site.  An 80m-long channel known as L-Ghar tad-Dwejra (see picture on the right) links the lagoon to the open sea. The mechanism behind the formation of this tunnel is called slab failure and is tightly linked to the formation of arches such as the now-collapsed Azure window.  Indeed the tunnel of the Inland Sea can help us in our understanding of one of the first stages that lead to the formation of natural arches (more on that further below).  Following its initial formation via slab failure, wave action over many years has kept enlarging this tunnel which is a favourite destination for scuba divers.
THE FUNGUS ROCK (IL-GEBLA TAL-GENERAL)
THE BLUE HOLE (IL-ĦOFRA TAL-BERWIN)
The Blue Hole (known as Il-Ħofra tal-Berwin is a blowhole in Dwejra, measuring around 9X10 metres.  Whilst enclosed from three of its sides, the North-West facing wall has collapsed, and all that remains is an arch reaching down to about 6 metres below sea level, which is adorned with golden cup coral (parazoanthus axinellae). This arch forms a spectacular window leading out to the open sea.  At the bottom of the hole at 16m, there is a cavern in the South-Eastern wall, directly opposite the arch of the Blue Hole.

​As one may expect, the Blue Hole with its splendid underwater scenery is a huge attraction for divers (you can read more about diving this site on the scuba diving page), but equally beautiful are the processes that lead to such formations in the first place, where various physical forces come together to create complex structures.
THE AZURE WINDOW (IT-TIEQA TAD-DWEJRA) 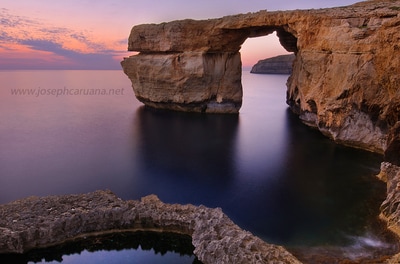 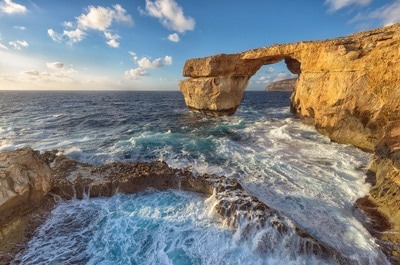 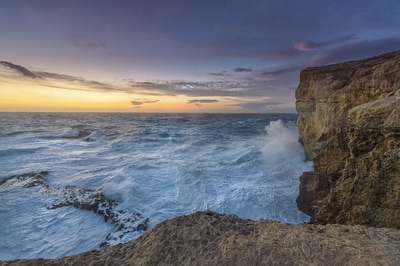 Whilst highly popular when it was still standing, it is apt to highlight the fact that natural arches have short lifetimes with respect to other geological features we encounter.  (In fact, it's thought that the Azure Window had perhaps formed as recently as the early 19th century.)  Therefore, we can appreciate that arches are short-lived, transitory phenomena which, while attractive, are just one short phase amongst many.  Furthermore, the collapse itself is a very interesting event, as are subsequent phases.  The future the Azure Window lies beneath the waves, with its remains scattered in pieces both large and small on the sea floor.  Over the years these will become a reef.  This process will be followed closely by divers who are keen naturalists. 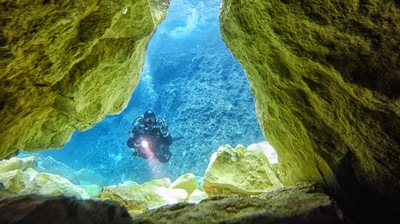 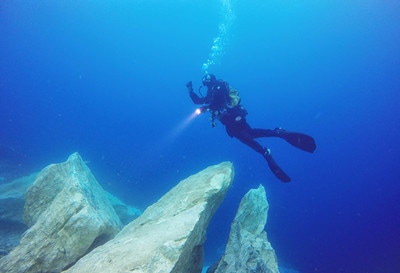 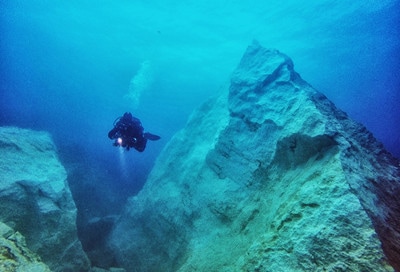 Unless otherwise stated, all content (including text, animations and images) on this website is copyrighted by Joseph Caruana.
​If you would like to use any of this content elsewhere, ask for permission first.
Original file of Tethys (creative commons) is found here.